In Rebirth, cute SD characters from multiple series fight alongside encouraging friends and Partners for victory!


(video rules update 8.2.3.1: First player cannot attack on their fisrt turn)
Get 7 cards in your Opponent's Retire Area and you win! 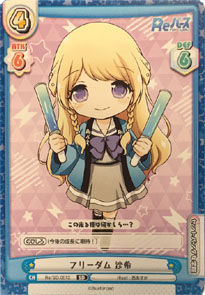 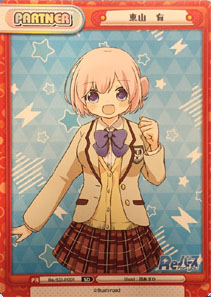 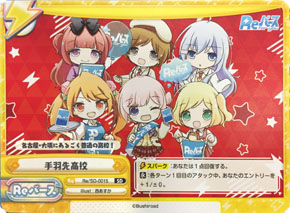 Rebirth Card
Deck consists of 50 (Character + Rebirth) cards, up to 4 of any card by name.
Character Cards: At least 42 in deck, with Cost, Attack, and Defense.
Rebirth Cards: Up to 8 in deck, horizontal image, powerful one-shot reversal abilities!
Partner Cards: 3 cards, separate from your deck, of helpful friends that fight alongside you! 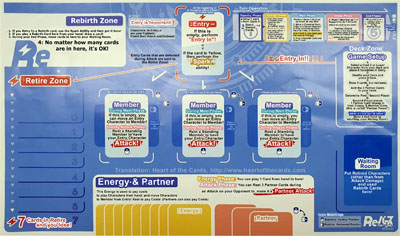 Rebirth Playmat (click for fullsize version)
Deck Area: Where your deck goes. If your Deck runs out, shuffle the cards in your Waiting Room to create a new Deck.
Entry Ring (1 slot): Where your fighting Character resides.
Member Area (3 slots): Where encouraging Characters reside.
Energy & Partner Zone: Faceup Partners and facedown Energy cards are here to pay costs. You can look at your facedown cards, but not your Opponent's.
Rebirth Area: Where Rebirth cards go.
Retire Area: Where defeated Entry Ring Characters go. If you "Recover" a point, move a card of your choice from here to your Waiting Room.
Waiting Room: Where discarded cards go.
Hand: Your hand of cards. You can see them, your Opponent can't. - Choose a Cost 2 or Lower Character from your Deck and place it facedown in the Entry Ring.
- Shuffle Deck, place in Deck Zone.
- Draw 3. (no mulligan)
- Add your 3 Partner cards to your hand.
- Decide first and second player.
- Second player chooses 1 Partner in hand and places it to the Energy & Partner Zone. (This is called "Partner Preset")
- Both players faceup their Entries, and first player takes their turn! - Entry In: Characters in the Entry Ring fight. Many times during the game, the Entry Ring will be vacant. When that occurs, flip the top card of your deck (this is called "Entry In"). If it is a Character, place it in the Entry Ring. If it is a Rebirth card, place it in the Rebirth Zone and Entry In again!
- Spark: When you Entry In, if the card is Yellow, perform the Spark ability on the card! (However, if your opponent has a card with a [Cancel] ability, they can stop you!)
- Paying Costs: To move a Character from Entry Ring to a vacant Member Slot, or to play a Member from hand to Entry Ring or Member Slot, you must pay the Cost of the Character by resting a number of cards (facedown Energy and/or faceup Partners) in the Energy & Partner Zone equal to the cost. Standby Phase (do each of these in order):
- Draw a card.
- Stand all Rested cards.
Energy Phase (do each of these in order):
- You may put a Partner card faceup in Energy.
- You may put 1 card from hand facedown into Energy.
Main Phase (do any or all of these three actions as often as you like in any order!):
- Move Entry Ring Character to vacant Member Slot.
- Play Character from hand to Entry Ring or Member Zone.
(The above two actions require you to pay the Cost of the Character)
- Play a Rebirth card from hand. When you play a Rebirth Card from hand, draw a card.
Attack Phase (you may attack as many times as you like / are able! First Player's First turn: no attacks!):
- Rest 1 Member to do 1 attack. You may also Rest 3 Partner Cards in the Energy & Partner Zone to power up to a Partner Attack!
End Phase (perform the following action):
- Put your Rebirth cards from your Rebirth Zone to the Waiting Room.
Go to next player's Turn! Attacks:
1. You may rest 3 of your Standing Partners. If so, this becomes a Partner Attack.
1. When an attack is declared, the Opponent can decide whether to use a Blocker by discarding a Character with "Blocker" from hand. If they use a Blocker, the attack will do zero damage.
2. Deal damage equal to the Attack power of the Entry Character to the Opponent's Entry Character.
3. If the amount of damage meets or exceeds the Opponent's Entry Character's Defense, place the Opponent's Entry Character in their Retire Zone. If this is a Partner Attack, place the Opponent's Entry Character in their Retire Zone, regardless of the amount of Damage done.
4. If the amount of damage does not exceed their Defense, the damage is carried over throughout the turn.
Entry: Only active when this Character is in Entry.
Member: Only active when this Character is in Member.
ReCombo: Only active when you have a Rebirth Card in your Rebirth Zone.
Spark: Only active when this was placed to its zone via Entry In.
True Power: This ability has a condition that needs to be met to be active.
Level X: The total number of your cards in Retire Zone plus those in your Member Zones must be X or higher for this skill to be active.
Blocker: Discard to set a non-Partner attack to 0 Damage.
Cancel: Discard to negate the listed ability.
[C]: ("Continuous") This ability is active for as long as this card is in play.
[A]: ("Auto") This ability says when it activates and begins to apply and when it ends. The card does not need to be in play once the ability is activated to apply.
Does the reveal of Entry Characters at the start of the game count as "Entry In"?
No, Entry In only occurs when your Entry is made vacant during the game. Therefore, Spark abilities on starting Entry Characters do not activate at the start of the game.

Can I use different sleeves for Partner Cards?
Yes you can.

If I pay the Cost to play a Character from hand to Entry, and then later move it to a Member slot, do I have to pay the Cost again?
Yes, both of those actions require a Cost to be paid, regardless of where the Character came from before it was in the Entry Slot.

Do Supporting Members "Boost" the Entry Character?
Supporting Members do not "Boost" or otherwise add Attack unless cardtext specifies as such. Resting a Member to Support is required to perform an attack with your Entry character - they are simply "cheering them on"!

I just hit 7 Retire! Do I lose?
As long as your Entry is empty, you still have a chance! You don't actually lose until you are done performing Entry In, so if you flip a Recover, you can keep fighting!

Something made me discard a Partner Card from hand / move a Parnter from the Partner area to the Waiting Room! What happens?
Partner cards that get somewhere over than the hand or Partner Area are removed from game.

If both players have a vacant Entry, who performs "Entry In" first?
Whoever's turn it is (the "Turn Player") flips in first, and performs any Spark abilities, until they have a Character in Entry. Then, their Opponent does. In general, if multiple things need to happen at once, the Turn Player does all of theirs that they have to do, then the non-Turn Player does one, then repeat all that until everything is handled.

A card effect says "Rest your Energy". Does that include Partners?
No. "Energy" and "Partner" are different, although both can be Rested freely to pay for costs (so you can pay (2) with 2 Partner, 2 Energy, or 1 of each).